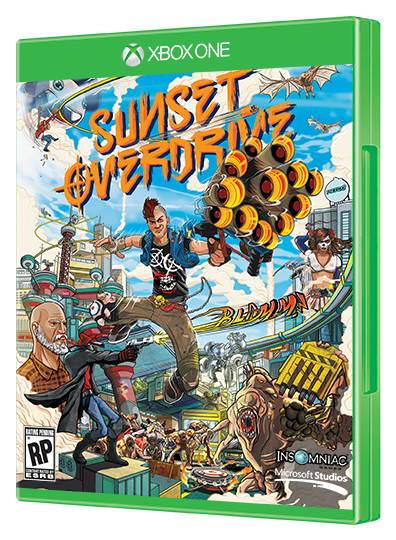 To say that Sunset Overdrive puts a massive focus on movement and traversal would be an understatement. The game trains you pretty early on to feel like you’re doing something wrong if you’ve stopped moving for even a second or are merely walking on the ground. The fact that your run speed is ridiculously slow and enemies have an easy time damaging you while on the ground even supports this idea. Rather, the game would have you grinding on rails and power lines or bouncing on things like cars and bushes to get around. This makes traversal itself absurdly entertaining in a way that I haven’t felt since Crackdown or Prototype, however, it’s the integration of this movement style with the combat where the fun really lies.

Admittedly it is a little bit difficult to wrap your head around having to jump, grind, and wallrun while dispatching swarms of enemies, especially in the beginning when just remembering that you have to press X mid jump in order to magnetize onto a rail is a chore in and of itself. However, the controls are smartly designed in their simplistic nature and the game is forgiving enough with the timing that it all quickly becomes second nature. In addition, the auto aim is so generous that you really only need to be aiming vaguely in the direction of an enemy and you are pretty much guaranteed to hit them. I initially believed that all of these concessions would make the game too easy but the player character is squishy enough that it really only takes several shots to be dispatched. That said, careful playing ensured that I only died two or three times during my entire playthrough.

The combat is quite satisfying and manages to stay that way even though many of the game’s numerous story mission focus on it with very few deviations, but the missions that do change things up manage to be the most memorable of the bunch. Boss battles in particular are a highlight of the game and are something that I wish occurred more frequently, especially considering how well suited the movement and combat system is to them. The side missions, while naturally enjoyable thanks to the combat, often fail to deviate from the mission formula set in place by the rest of the game as well, making them drastically less interesting as time goes on. That said, there are a relatively large number of little challenges to go along with the more standard missions which, thanks to ones that focus on traversal or specific weapons, are some of the most enjoyable portions of the game. At time of writing I’ve put roughly thirteen hours into Sunset Overdrive and, while I’ve completed the story and just about all of the side missions, I’ve only done half of the challenges, so there is certainly a wealth of content to keep you interested.

Sunset Overdrive is a must play title for Xbox One owners simply because there really isn’t anything else like it thanks to its wholly unique combat and strange style. Insomniac’s trademark insane weaponry is represented here to great effect and only serves to make the whole experience that much more interesting. If you can look past the game’s sometimes cringe worthy attempts at humor early on then you’re bound to find an immensely entertaining and satisfying game that doesn’t waste too much time obsessing over things like plot, and instead ensures nothing gets in the way of the fun.